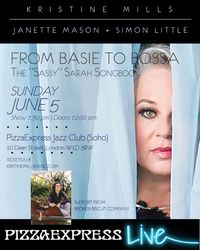 From Basie to Bossa - The “Sassy” Sarah (Vaughan) Songbook

Expect a journey through the prolific career of “Sassy” Sarah Vaughan beginning with hits from her early solo career in the 1940’s, through songs of her mid-century recordings from the Great American Songbook, then culminating with tunes discovered for her love of Brazilian music from the 60’s to the 80’s.

“So Ms. Mills’ vocal ability is more than ‘a way with a lyric,’ it’s an immersion into material that she owns, not something someone else built. This is her intimate familiarity with lyrics that become almost instantly familiar inside your head. This isn’t mouthing words...This is considerable vocal talent.” - girlsingers.org

Winner of the Houston Press Music Awards, Best Female Vocalist and Best Songwriter, Mills was among the 2013 Houston Press Rocks off 100 - Houston’s Most Distinguished Artists and a 2012 Houston Arts Alliance for Established Individual Artists Grant Recipient. Mills won a Gold REMI Award for her soundtrack written for the documentary film Collector’s Waltz.

Kristine played sold-out shows as guest vocalist with the Duke Ellington Orchestra on tour in Brazil. She headlined for the Brazilian International Jazz Festival presented in performing arts centers and theaters throughout Brazil on the two-year anniversary of the release of her album, “bossanovafied”. In addition to many appearances at the Metropolitan Room, Duplex and Zinc Bar in New York, she performed at Snug Harbor in New Orleans, The Miami Music Festival, Carnival Latino, Cezanne’s and The House of Blues in Houston, to name a few. Mills was Artist-In-Residence at Hotel ZaZa Houston, and the Music Director and featured performer at Hotel Granduca Houston. She is now performing in respected venues in the London scene.